A building’s first line of defense in controlling the consumption of energy is its roof. Solar reflective coating dramatically lowers a roof’s surface temperature, resulting in greater indoor comfort and less demand on an air conditioning system. This, in turn, means reduced energy costs.

Solar reflective roof coating is typically white – as seen in this picture: 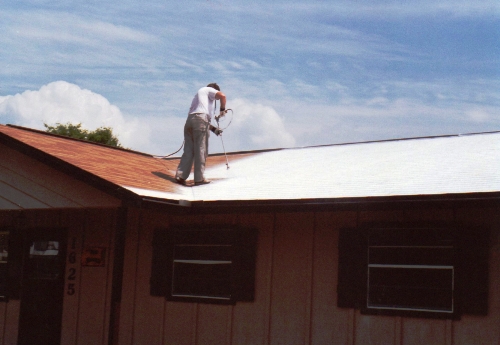 The coating consists of a polymeric binder mixed with pigments and special additives such as silver, aluminum and pigment flakes to provide its reflective properties. In addition to lessening the demand on air conditioning and saving energy costs, solar reflective roof coating provides extra protection to the roof membrane – ultimately extending its lifespan.

A dark roof absorbs the sun’s heat, while a white roof reflects it away. That’s the key behind solar reflective technology. A test was conducted on a sunny day with an ambient temperature of 100 degrees F. The surface of a roof with a black membrane reached a whopping 180 F, and a gravel roof reached 145 F.  In comparison, a roof with solar reflective coating was remarkably cooler at 90 F, reducing the cooling demand by 15%.

The entire building industry is taking steps to go green because the codes have become more stringent.  This has created a need to make products that don’t have an adverse impact on the environment. Reflective roof coating is one such product. It can either be applied at the factory or after a roof installation.

NB: Reflectivity isn’t the only important consideration in a roofing material. It should also have high “infrared emittance” to help the roof discard heat by re-radiation.

What Are the Benefits of a Reflective Roof Coating?

Selecting the Right Roof Coating Is Based on Several Factors

If you are looking for the best roofing replacement warranty in the Lake Norman area, contact us at Race City Roofing. We even offer 24-hour emergency service!